It never ceases to amaze me how many readers, fans, friends, and sundry unmentionables ask me my take on vampires. Am I a fan? Do I like Twilight? Where is the genre heading? What’s my favorite vampire book/movie/story/etc? Well, I thought it would finally put those questions to the grave by simply answering them here — in the big seeping eye of the masses, where the court of public opinion can either hang me or huzzah me.

Shall we count the claims I stake on the beloved Vampire? Muhaha? 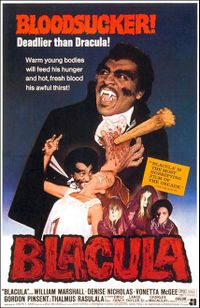 This is going to sound very odd, but my first exposure to the vampire was… are you ready for this? Blackula! That’s right, the ’70s “blacksploitation” film about an 18th century African prince who is turned into a vampire and locked away in a coffin by Count Dracula himself. The film was actually quite good for its time and takes advantage of some solid rhythm and blues for the soundtrack.

From there, my vampiric joy migrated to the likes of Dracula, Hammer Horror’s Dracula, Sammy Terry, Fright Night…well, the list goes on and on. Suffice it to say, from an early age, the Vampire held strong sway over my ever-growing love for the macabre, dark, and bloody.

Even in the 80s, when vampire films almost took a turn for the Count Yucula (Think “Once Bitten”), there were some amazing films (Near Dark and The Lost Boys immediately come to mind).

But we’re in a different time now and the court of public opinion has given birth to a new-found love of the vampire — this love turns inward and adopts elements of the vampire I don’t much care for.

In it’s place is the idea that the vampire is a romantic creature who would rather cuddle or wine and dine you than drop you into a dirt-filled grave and feast on your life-juice. No more gaunt cheeks and widows peeks. No more bad Hungarian dialects.

As much as I want to punch the entire Twilight series in the junk, at least it brought the vampire back to the fore. Now an entire generation has fallen in love with the monster — even though they’ve made him sparkly and hunky. And even with that God-awful movie series making millions of dollars as it re-invents the vampire into some fluffy, kissy, watered-down iVampire, I have absolute faith that generation will eventually grow up, realize their folly and allow the vamp to devolve back into the dirt to be reborn as the beast it deserves to be.

As for me? I long for more films like 30 Days of Night, where the monster is allowed to be true to form and go all Nosferatu on mankind’s blood-stained ass. In the meantime, I will confess to having a secret love affair with films like:

Now those are vampire movies. Granted some of them are acquired tastes (Subspecies and Nightwatch), but all of them will entertain and at least (with the exception of The Hunger) have nasty-ass vampires sure to make you think twice about getting knocked up and smoking the ganje with one of the undead.

Those vampires would rather have your souls and hearts on a silver platter — not date you and take you to prom or write your name on the toes of their Chuck Taylors (as Emo Vampires are wont to do).

And, to show you what a real bad ass vampire looks like, I give you Radu Vladislas — the bad-ass Vampire from the Subspecies series.