It’s October and October means Halloween. Halloween means horror and horror means monsters. We all have our favorite monsters, but have we ever wondered just which monsters would win in a fight to the death (or undeath, as it were)? Well, I’ve always wondered this very thing, so I wanted to take some time (maybe even the rest of October) to answer the question.

The question will be answered slowly, almost painfully so. How else does one place monsters in a cage match for all to see? Pain must be handed out, suffering must be legen–wait for it–dary!

I pick two monsters and put them together. After discussing their pros and cons I will decide a winner. You can post comments to rebut my choice. If the comments and rebuttals are good enough, I’ll change my mind. The winner of the cage match moves on to the next match — until Halloween, where we will declare just who is the baddest monster of all time.

The first of the cage match is between: 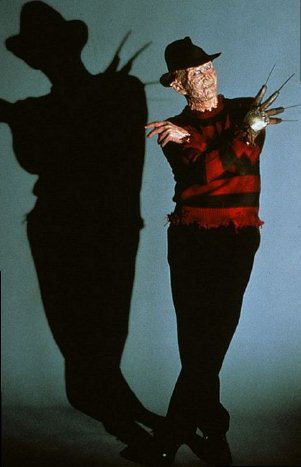 Freddy was born the bastard son of a thousand maniacs — at least he was in the original mythos. It wasn’t until he was mortalized in the reboot of the original film that he became just a man with a possible dark secret. The man was eventually burned by pissed off parents — no thousand maniacs (or 10,000 maniacs if you’re Eddie Brickel).

Little needs to be said about the beast that inspired more swooning women (and men) than any other monster. Dracula brings class to the realm of the monster, but also instill fear in the hearts of mankind (and lust in the hearts of women — and men).

I’m sorry, but as much as I love the great Count, I must stop at Twilight. The abtastic, sparkly vampires in that series watered down the vampire so much as to detract from the power and glory that is one of the originals.

So I declare the first winner in the 2012 Monster Cage Match to be:

Congratulations Freddy! Don’t let this win go to your already inflated ego. In our next installment, you’ll be taking on a new crowd favorite (to be revealed this Friday). Now, discuss… did I call this one right?