Skip to content
Home » News » Prometheus: Scott shows Lucas how to do the prequel

After doing a grueling twelve hour mountain bike race last Saturday, the next day was all about finally seeing the movie that has had more hype than any other sci-fi film since Lucas released the first of the Star Wars prequels. And instead of going home thinking “What was he thinking?”, all I could think was “Wow, I can’t wait to see where this goes!”

Let me give you my take on Ridley Scott’s Prometheus. 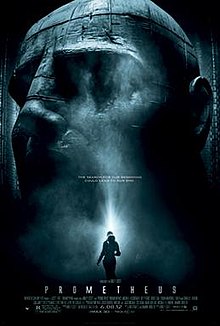 The Alien franchise (at least the first two in the franchise) define sci-fi horror. No other film in the genre comes close. In fact, when mentioning top straight up horror films, many are inclined to include Alien or Aliens (or both) in their list. They are just that good. Horrific on an epic and grand scale like you just won’t find anywhere else.

With that in mind, how could it be possible that Ridley Scott could do the franchise any favors by going once more unto the breech? How? He’s Ridley Scott, that’s how.

I’ve read a lot of discussion about the film Prometheus — about how the film bit off more than it could chew and that the battle between religious beliefs was almost too much. To that, I say “nay nay”. In fact, from my vantage point, the entire religious aspect was more a side show than a main attraction. Within the confines of this brilliantly crafted roller coaster ride, you had people obsessed with finding a truth the human race has searched for for generations — where did we come from. Only, in the case of Prometheus, it takes that search far, far out into deep space (where no one can hear you pee your pants in fear).

Prometheus will feel like two films to you. The first hour is a slow, steady build up to an insane climax which takes the second hour to resolve…sort of. Let’s address both halves.

The first half of the film takes it’s time and gently prods you along the way. Sixty minutes (or so) of guiding you to a light that winds up being so harsh, it’s almost hard to look at. You know something is coming and you’re almost afraid to look. All the while you’re along for the build up, you’re watching what might well be the single most gorgeous piece of film making ever. The CGI is stunning and the bleak world is so thrilling. And the bits and pieces of recognizable HR Geiger design send chills up your spine.

The second half is an electric, horrific, thrilling ride that will, at the same time, force you to look into and away at the same time. You cannot help but watch the horror unfold — you want to watch it.

It’s in the second half that you see where Scott is going. At some point you have this “ah ha” moment where it all clicks and you get giddy with delight as you witness tiny points of connection developing between Prometheus and Alien. When those dots start getting connected it becomes clear that Mr. Scott really knows his craft and his world. Unlike Lucas, who seemed to make a mockery of a beloved franchise, Ridley Scott gave his franchise a new life and power that can only lead to ever-greater and frightening things. And if Scott creates a sequel to the prequel in a way that Aliens upped the ante for Alien, what will be witnessed will be nothing short of absolute brilliance.

Prometheus was gorgeous, had impeccable acting, offered a lush landscape of fear, and even gave us a symphonic score help the rise and fall of the action and drama.