Welcome back to the Jackverse, where the power is always on and the soda pop is free flowing! Today’s topic might well be near and dear to you all — television! That’s right TV’s TV! And here in the Jackverse, there’s a theory building up that television itself has jumped the shark.

For those that don’t understand the phrase “jumping the shark”, let me explain. There once was a show called “Happy Days” that enjoyed quite a long, successful run. It wasn’t until the show aired an episode of it’s main character (Fonzy) jumping a nest of sharks on water skies. After that episode it all went to Hell. The show officially tanked and shortly after it was done. Hence the term “Jumping the shark”. 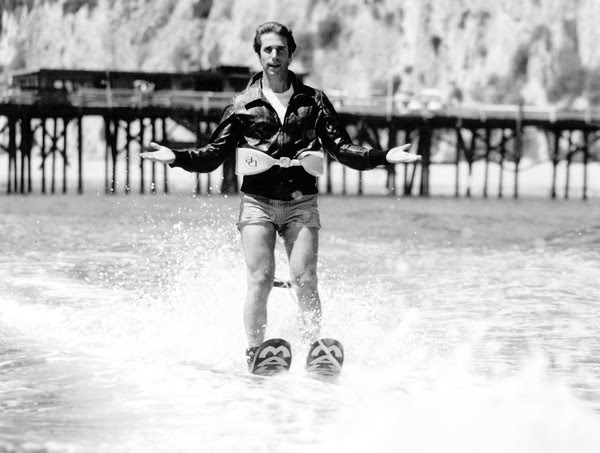 But from my perspective, TV itself has jumped the shark. How can I say that when there is so many wonderful, intelligent shows on?

The list goes on and on. The problem is sort of two-sided… but both sides are tightly connected. On one side of this coin we have reality TV. While at the same time it is the absolute epitome of the ‘dumbing down’ of society, it is constantly having to find new and dumber ways to top itself.

But beyond the wretched wreck that is reality TV, and the other side of this tasty chocolate coin, all other shows are doing something very similar in the race for ratings. Every season, every show has to constantly be upping the stakes, going bigger, pushing beyond the borders of logic and quality.

Take Once Upon a Time for instance. Last year the fantasy-drama was one of the better shows airing. Not only was it lovely, it was well written and (for the most part) well acted. This season? Well, the sophomore season tells a very different tale. Now we’re watching horribly executed CGI, story lines that are doing everything they can to top what last year did (regardless of logical constraints and plausibility.

Normally, that in and of itself I can handle — but top that confection with a thick layer of overacting and the sweetness all too soon becomes too much. That is what is happening in Once Upon A Time. The entire Red Riding Wolf story arc is just Once Upon A Time sucking on the teat of True Blood and using really horrible CGI to pull it off.

Other shows are lucky to only suffer from one or the other. Though I am absolutely loving American Horror Story, it seems they are having to pull out stops on the organ of network television even I didn’t think existed. Some fans of the show are already calling shenanigans and saying the show has stretched the rosary beads of plausibility too far.

How far is this going to go? Too far I suspect.

Ultimately, my fear is this — the great gods of TV seem to have trouble keeping programming from getting out of control. Reality TV couldn’t be any further from reality and consistently paints a fairly ignorant portrait of the ‘average American’. As the production costs of shows continues to rise, the producers are going to have reach further and deeper into their bags of tricks to ensure they retain their audience — this could mean more and more implausibility or even insulting our collective intelligence. If the networks and producers aren’t careful, they’ll never be able to steer the boat away from that stirring, swimming pit of flesh-eating sharks.

Of course, if this continues — maybe we could see a new Mystery Science Theatre 3000 taking on the television shows. That, my friends, deserves a big MUHAHA!

What do you think? Is television collectively losing its mind? Let’s chat about this!