NOTE: Armand and Jay are BFFs. It says so on Jay’s Website.

Teaser sample from the pages of the latest Dying Days book Dying Days 7 by Armand Rosamilia. 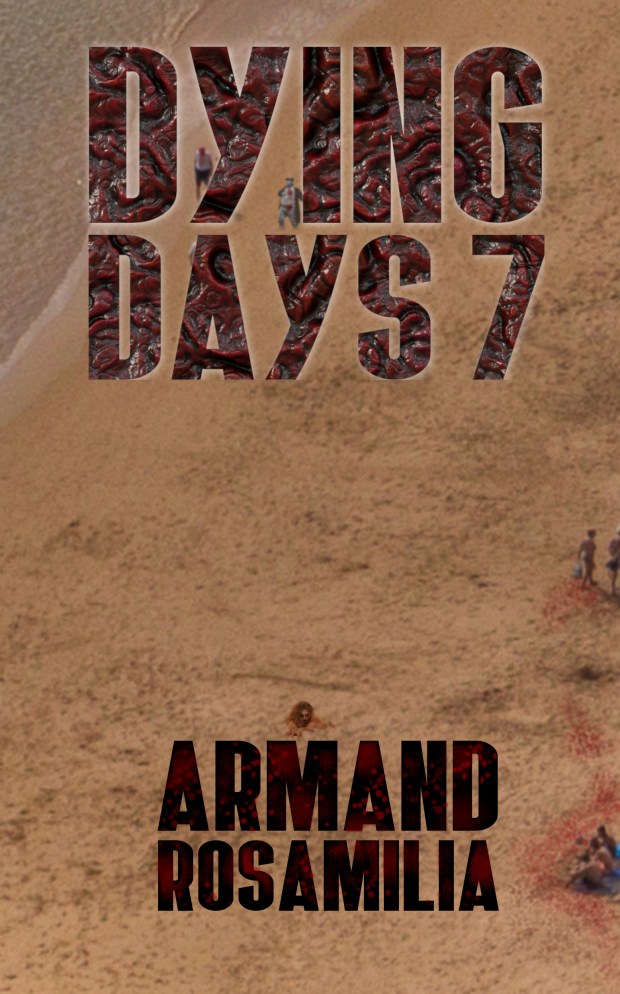 From Dying Days 7 by Armand Rosamilia

Tosha Shorb stabbed another prone zombie in the head with her metal stick, making sure the fucker wasn’t playing possum. Too many zombies were getting smarter now, and they were dodging bullets, ambushing patrols and setting traps.

A zombie three days ago walked up to the northern gate with a machine gun and opened fire. He killed six men and women before they’d destroyed it.

The zombies were beginning to adapt and look like the guy standing next to you, and Tosha knew one of them was eventually going to get inside the compounds and kill a lot of people. 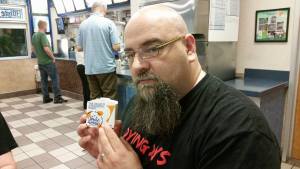 It was the reason, as each section of the peninsula from Ormond by The Sea to South Daytona was reclaimed, walls had been built every half mile with checkpoints. The idea was simple: if a section was breached the wall would keep it from spreading. All it took was one bite from a zombie to turn dozens of others into monsters or a smart zombie inside killing people without being caught.

“I’m hot,” Jeremy said, one of the younger members of the recon team. Tosha thought he was an idiot. A pretty boy. He was barely twenty but acted like he was fifteen at times, talking about playing videogames and watching anime. Tosha had slept with him but she wouldn’t again. She didn’t have the patience to train Jeremy properly.

“We’re in Florida,” Bernie said. Tosha knew she also thought Jeremy was an idiot. “Spread out. You’re too close to me. Would it kill you to follow simple directions?”

“Asshole,” Jeremy muttered under his breath but moved to his right.

The recon team was six people, with three men Tosha didn’t know personally. She didn’t need to ask for their names because they’d be switched out for three new faces tomorrow.

Tosha had asked The Lich Lord why he kept moving everyone around, yet her and Bernie had been the set two leading the first recon team each day.

“I want to give everyone a taste of every job. See what skills they possess. See what jobs excite them so everyone is where they need to be. I’ve already found the spot for you and Bernie. Outside the walls finding the things we need and killing the things we need dead,” The Lich Lord had answered. “Until I find someone who can kill without remorse like you or follow you blindly like Bernie does, you’re the core of the team.”

Tosha couldn’t argue with his logic. After every patrol he’d ask her who was worth keeping on the team. None of them excited Tosha.

Lately they had been unchallenged. Yesterday they hadn’t seen a zombie at all unless you counted the many rotting dead.

It meant a smart zombie was in the area and clearing out his territory. Tosha needed to figure out where it was hiding.

“There’s a mall up ahead,” Bernie said. “I wonder if anyone cleared it yet.”

Tosha stopped and sent out a thought to The Lich Lord, who was hidden away in the Ocean Center in darkness. She knew he could no longer go out in the light. She wondered if he’d explode like in those great old horror movies or if he’d start to sparkle and drip away.

If you imagine me like a sparkly vampire again I will rip you apart, The Lich Lord said in her head. Tosha could hear the humor in his thoughts. It was the game they sometimes played. I won’t explode. The sunlight drains me. It’s uncomfortable.

Tosha was still uncomfortable letting him into her head like this. It was easier than driving all the way back to The Promised Land and chatting for awhile, though. She mentally asked him about the mall.

It was cleared once. Many months ago. Before you joined us. I’m sure there’s nothing of value left inside, The Lich Lord said to Tosha.

Tosha twirled her metal stick in her hand, wondering how many seconds would pass before stupid Jeremy realized she’d stabbed him in the face and he died. She almost regretted sleeping with him now, too. “We have very specific instructions for being out in this shit risking our lives. Trying to get the last copy of Madden isn’t on the list. Got it? We need supplies.

Bernie bent down and stared at one of the zombies.

“This one’s been shot in the face,” Bernie said. “It might even be recently.”

“How can you tell?” Jeremy asked.

Tosha walked over to the closest zombie and frowned. It had also been shot in the head. Right between the eyes at an angle.

Tosha looked up and around, eyes stopping on the roof of the mall. She didn’t see anyone up there but that didn’t mean there wasn’t.

“We need to get off of the parking lot and being so exposed. I feel like we’re being watched,” Tosha said.

“Are they friendly?” Jeremy asked.

“They have a long-range weapon and know how to use it. Feel free to stay here and be involved in their target practice,” Tosha said. She didn’t wait for Jeremy to answer. He’d only say something stupid.

She led the group across the parking lot and put a torched hotel between them. Her gut told her the mall was where whoever had been killing zombies was hiding out. They needed to put some distance between right now.

One of the others was told to watch their backs to make sure nothing tried to get behind them. If they got shot in the face Tosha hoped they’d scream out to give warning to the rest of the team, too.

The racetrack, once a gathering place for thousands of racing fans, was to their left and in ruins. Since the last time Tosha had been this way the stands on this side had collapsed, opening a gap right to the track itself.

“Where are we going?” Jeremy asked, coming up next to Tosha.

“Stop talking or you’ll be the next guy with a bullet in your skull,” she said.

Jeremy smiled and leaned closer to Tosha. He smelled like he hadn’t bathed in a couple of days, which was probably true.

“When we get back to The Promised Land why don’t you come over and cook for me? Then we’ll have some dessert, if you know what I mean,” Jeremy said.

Tosha turned and kicked him in the nuts.

Jeremy went down on one knee and Tosha put up a hand to keep everyone else away from them. She saw Bernie, who’d taken point, stop and keep her distance.

“Let me get this straight… you think because I let you go down on me I now want to be your fucking cook? You want me to wash your fucking laundry, too? If you were any good we’d be still doing it, little boy. Consider yourself very lucky I did you to begin with,” Tosha said.

As she turned to walk away she heard Jeremy call her a bitch under his breath.

Tosha winked at Bernie, who frowned and turned away.

“I don’t think I heard you,” Tosha said to Jeremy without turning.

Tosha turned and put a bullet right between Jeremy’s eyes.

“Anyone have a problem with that? The guy’s an asshole,” Tosha said.

No one else said a word. They didn’t seem shocked at her actions, either.

They all knew he had it coming. The Lich Lord would give Tosha shit about it but she didn’t care. He wasn’t a survivor. He was a whiner.

“We need to move. If there are any zombies left in the area they’ll hear the dinner bell,” Bernie said.

Tosha told the others to take his gear.

“We’ll circle to the right and see what’s that way. If there are apartments we can start going through them. See how many we can recon before it starts getting dark,” Tosha said. She had three cans of spray paint in her pack, which she’d use to mark doors they’d already searched.

It was a primitive system but it worked.  When other patrols went out in search of supplies they’d already know which places were done.

Just across the bridge on this side they’d also set up a temporary camp, where laborers were busy pulling apart every building. They needed the wood, the bricks, the siding and anything else they could repurpose for the new homes and buildings in The Promised Land.

Tosha knew their movements would also help to find intact buildings and anything of value since supplies were so limited.

It felt like half of the world had already burned and The Lich Lord was trying to save the other half and jam it into the peninsula between the Atlantic Ocean and the Intracoastal Waterway.

Tosha didn’t know what his end game was and if she’d survive to see it. She just hoped if this was an elaborate trick on his part she’d be the one to put a bullet in his head.

Check out Dying Days 7 or begin with the first book. Also check out an ongoing Dying Days Young Adult serial on Armand’s Patreon page for as little as a dollar a month. 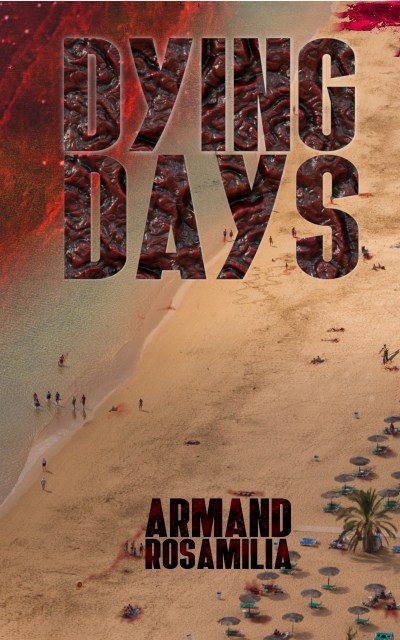