#WinterZombie sends the blue of its chill into that of my hair-twin, Jaime Johnesee. Are you ready for THAT much awesome? Prepare yourself.

Jay Wilburn: What do people call you?!

Jay: I misspell your name a lot.

JJ: It happens often. I don’t even notice anymore. 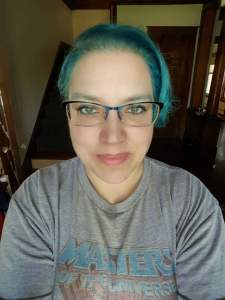 Jay: What is your latest Bob adventure called? 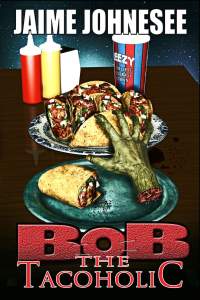 Jay: Describe the story for us.

JJ: Having become addicted to a taqueria’s calves brain tacos Bob has to admit he’s got a problem. The reason soon comes clear when the horde pokes into the restaurant and finds they’ve been serving human brains instead of calves.

Jay: Perfect. Tell us about Bob.

JJ: My main character is Bob. He’s a zombie with seriously bad luck and a great attitude. He’s more like Clark Griswold than Dawn of the Dead, however.

Jay: What makes your zombies different from others in the genre?

JJ: Bob is a sentient zombie who isn’t out to infect or destroy anyone. He’s just your average rotting joe.

Jay: That makes for a different kind of story.

JJ: Yes. My zombies aren’t viral, but voodoo based. They’re also not out to eat or kill anyone.

Jay: What spawned the idea for Bob?

JJ: I have friends that dress as zombies for charity and film work and they all have this sweet, fun nature. Bob is me, if I were a zombie in tribute to my friends.

Jay: How many Bob stories does that make now?

JJ: Bob the Tacoholic is the seventh book in the Bob the Zombie series.

Jay: What changes in this story for the series?

JJ: Bob is going to have to rebuild some trust with some of the people he hurt during his addiction.

Jay: Being a zombie is tough on friendships, I imagine. Thanks for stopping by. Enjoy some tacos before you go. I got them from this great new place … Hey, where are you going? They’re really good … Jaime? … JJ?