ee cummings has nothing on EE Isherwood…not when #WinterZombie wraps its cold, undead fingers around his heart.

What I mean to say is…enjoy this spotlight on EE Isherwood. 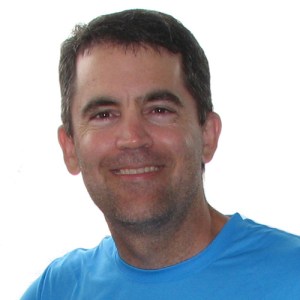 EE: Zombies Ever After: Sirens of the Zombie Apocalypse, Book 6

Jay: Describe the book for me?

EE: It’s been nearly three weeks since the sirens heralded the arrival of the zombies. Liam has been separated from his girlfriend Victoria and intends to run across the city to find her, acting like the invincible sixteen-year-old he thinks he is. Victoria has discovered a terrible secret about the cure and soon finds herself on the run as well. Their drive to find each other takes them to Cairo, Illinois — the destination of the largest horde of zombies anyone’s ever seen. 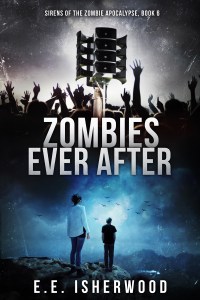 Jay: Can there be a storybook ending in such times?

EE: They’ll have to read it to find out.

Jay: Tell us about your characters.

EE: Grandma Marty is the 104-year-old great-grandma of Liam Peters. She and Liam left her home at the beginning of the ZA and have been on the run ever since. She is wise and seasoned, but has strange dreams that make her wonder if dementia has finally caught her. Liam is young and brash, and spent his former life playing video games, but he finds a newfound sense of responsibility for her when he realizes how vulnerable she is. Victoria is Liam’s girlfriend; she’s from Colorado, stuck in St. Louis. She’s impressed with Liam’s dedication to Grandma and falls in with them both early on. They are the core characters for all six books.

Jay: What makes your zombies such a challenge for your characters?

EE: My zombies are intentionally hard to pin down. They don’t eat brains or rip out intestines as that would stop the transmission of the virus to new victims. They’ve been seen biting necks, wrists, and ankles — anywhere with easy access to flowing blood. But everyone’s blood is different, with traces of medicines, local minerals, and distinctive elements from water supplies across the world. This forms pockets of zombies that are distinctive in their abilities. Some can run or climb. Some can hide or swim. Some can even emit a powerful scent. But they all have one unifying trait: convert living hosts!

Jay: Why do you think readers have responded to your series the way they have?

EE: This is book 6 in my series, and I’m happy that readers seem to find the stories aren’t rehashes of other works. Obviously, this can be difficult as we as authors all like to open up Pandora’s zombie box and see how fast we can make the humans run. However, I try to include characters such as the 104-year-old woman to keep me grounded in reality. In her case, I wrote her as a tribute to my grandmother, but also because I wanted to make the very elderly important to the story. What if, in a world where centenarians are the first to get hunted down and killed by zombies, they held the key to the cure?

Jay: So there were some tributes in writing these books?

EE: My first book was written after my grandmother passed away in 2014. It was my way of coping with her loss and all the things she did for our family. I started with a short story about her, which later became chapter 1 of book 1. I titled the chapter CIV, which is Roman Numeral for her age of 104. It also means Civilization, which is conceptually where the series starts before devolving into a post-apocalyptic disaster. It was little coincidences like that which got me thinking about weaving those sorts of things into the narrative. She has strange dreams which can be attributed to stress, dementia, or even divine visions. Much of the first book explores the role of the mind in addition to excessive firepower during their escape from the city. 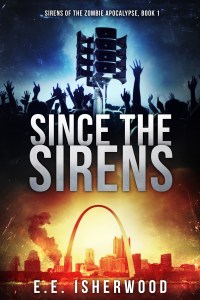 Jay: How does this latest book relate to the rest of the series?

EE: This is book 6 in the series, and I titled it Zombies Ever After as a nod to the fairy tale life many imagine after finding that special someone. My young heroes became close after shared stresses of many days of fighting and avoiding zombies as the threat exploded across the world. They get separated at the end of book 5, and I use book 6 to explore how badly they want to return to each other. Far from a romance, their feelings push them to accomplish the hard tasks required to survive as individuals in the new world. What will the future look like for two people together when so much killing has to be done…

EE: Everyone is important, in their own way. I tried to write this series without making it seem like the formula for survival is that everyone picks up a gun and starts mowing down the zombies. Yes, that’s part of it, but everyone has to contribute in any way they can. I found it interesting to explore the role of the elderly. They are very difficult to keep alive — some can’t exist from one day to the next without their meds — but there is something about them that makes them essential to finding a cure. In my books this is literal, but I hope some of the reader takeaway it is also figurative. Everyone, no matter the age, is the hero in their own story.