The Zombie craze has been ever evolving with more and more coming out about the creeping crawling undead.  From their very humble beginnings in pop culture zombies have always had a cult following that has spread like the virus it is into the overwhelming following they have now.  We now have fast zombies, slow zombies, zombies that don’t like sun, talking zombies, sexual zombies, and even zombies that fall in love.  It seems now a-days you can find any type of zombie you might want to read about. This begs the question: What is it you like about zombies?

For me, being the eternal optimist that I am, it’s the measure at which zombies can flow at you and the seemingly endless rate at which you can take them down with no effect and essentially no remorse.  I mean, they are zombies right?  Sure it would be extremely sad to see the majority of the population gone but I am a “glass is half full” kind of person.  I would eventually find the good in such a shitty situation.  For me I believe that it would be the video game-like aspect of sitting up high on a water tower somewhere with a couple thousand boxes of 300 win mag with my Remington 700 Long Range getting as much target practice as I could ever want at any distance. I am sure at some point it would get old but I think that would take a really long time.  As for zombie stories that I read and write, I love that same aspect. There is something completely terrifying about an enemy that never stops and never gives up.  They constantly multiply at an alarming rate with each new undead meaning one less human on your side.  In this case, the enemy is perpetually recruiting. 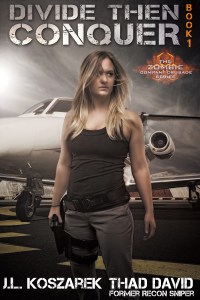 I would genuinely like to know your thoughts, the reader and/or the writer of zombies, what draws you to read/write about them?  What do you love most and what don’t you like about some?