Skip to content
Home » blog » The Case for Greg Ferrell

NOTE: This originally posted in the heartland known as Jay Wilburn!

Greg Ferrell has been on the zombie tours before. He is in an interesting phase of his writing career where he has developed enough skill and awareness of his voice as a writer to attempt a reset of sorts. He is going back to rerelease his Humanity’s Hope series with Devil Dog Press with a few key improvements. In a broader sense, he is revisiting his entire body of work and expanding himself as a writer in the process. He joins us on the Winter of Zombie tour in the midst of that career phase.

I think Humanity’s Hope works both as a horror novel within the genre and as a young adult novel in terms of some of its sensibilities. I look forward to Humanity’s Hope finding new audiences for this talented writer.

For much of his career, Ferrell has purposely called himself a storyteller instead of classifying himself as an author. Something about that title of author didn’t feel quite right to him. He’s reached a point where he feels comfortable calling himself an author that can tell great stories. He’s not setting out to compose a classic of English literature. He says he supposes Charles Dickens didn’t know A Tale of Two Cities would be considered a classic long after he was gone, so who knows? Even though he does not view what he does as being on the same level as the literary masters, he feels that we are all ultimately trying to achieve the same basic, important thing as we write – trying to tell a great tale.

He does not excessively plan before he starts drafting. With Humanity’s Hope, he started writing and let the story take him wherever it naturally led. More than once he was surprised by his own characters and what happened to them. I think that unexpected aspect of the story served to surprise me as a reader too. He typically has an idea of how the story will end, but he lets the tale unfold organically along the path to get there.

Ferrell still has the first ten handwritten pages of a future fantasy series that he plans to tackle soon. He decided early on to tell a story that was his passion – zombies. He finished a draft right before the series The Walking Dead was released. When he watched it, he realized his story was very close to what aired. He went back and started over with something different and that’s what brought us the great tale that is Humanity’s Hope.

He is signed on for a five book run with the Humanity’s Hope story arc. He has a standalone horror novel in the works for between those releases. There is another fantasy series he’s been building for about two years. After the five books, there will be room for expansion on the Humanity’s Hope series as well. 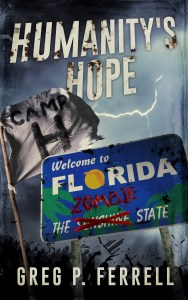 I hope I have made the case for Greg Ferrell. Check out Humanity’s Hope and be on the lookout for more great work coming from him.